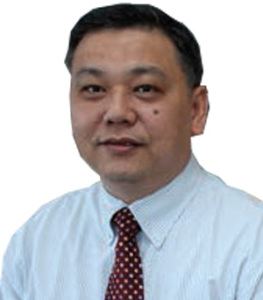 Growing a company from infancy to prime is a challenging task for every CEO. MediaBanc Founder, Alan Lim led the home-grown Malaysia media monitoring company to this benchmark with a holistic approach of heart and mind.

Founder of MediaBanc and VCE-1 Member, Alan Lim worked hard to grow his home-grown media monitoring business. Success came when he managed to combine a unique corporate culture with a tested management methodology. The small start-up in Malaysia had developed to an ASEAN enterprise and is poised to blossom further as part of a listed entity. Alan Lim has nurtured MediaBanc up the corporate life cycle to a position of ‘Prime’ and will soon let go of his ‘baby’.

Established in 1997, Alan Lim started MediaBanc with two partners and no staff. Today, it has 350 employees spread over six countries – Malaysia, Singapore, Thailand, Indonesia, the Philippines and Vietnam. MediaBanc is the market leader, capturing an estimated 50% of the media monitoring market in ASEAN. It provides intelligence service which monitors television, radio, newspaper, magazine and social media for advertisements and news. The information is categorised by company, brand, industry, sub-industry and sub-sub industries, and delivered online to customers via subscription. Customers include multinationals, advertisement agencies, public relations companies and corporate communication departments. They use the information to analyse their marketing campaigns, product positioning and brand competitiveness.

MediaBanc’s success started with good corporate culture. Alan credits his former Japanese boss in advertising firm Asatsu, U chiyama for giving him sound advice on this subject. He told him, “A successful company has a successful culture.” Alan calls the company culture or corporate philosophy he adopted as “one heart” where genuine sincerity comes from the bottom of the heart. In practice, this drilled down to not only working, discussing and making decisions together but also sharing company information and profits. Alan claims that everyone from the senior executive to the despatch boy knows the details on company revenue and expenditure. The only hidden data is the salary of individual employees.

“It is a culture shock to new employees,” Alan reveals. He admits that the open information flow has both merits and drawbacks. For example, his employees have started questioning the amount he spent on overseas flights and asked him to choose cheaper airlines like Air Asia. In another instance, employees voluntarily switched off the office lights during lunch time, to save on electricity after they saw the huge TNB bill. The savings translate to a better bottomline and more profit sharing. “It builds up a sense of belonging and pride, plus ownership of the company,” Alan asserts.

Besides building the right culture, Alan displayed great business acumen in developing the company, stage by stage, from infant to its current prime position, and getting the right corporate guidance.

In the early stages, the excitement of a growing clientele in six countries and advances in technology for media monitoring proved exhilarating. However, Alan reveals that he became anxious when the company’s fortune started to become erratic after the initial gung-ho period.

“I felt lost running the company, it was growing and also sliding back. I wanted to know how to get it right,” he recalls. He began searching for external assistance in terms of corporate advice. It was at this time that his friend, Andrew Chen, CEO of Fella Design introduced him to Vistage and Chair Heah Kok Soon.

After attending one meeting, Alan decided to join Vistage in 2007 as he was greatly impressed with Heah’s mentorship and coaching skills. Besides the one-toone sessions with Alan, Heah also gave organisational development training to MediaBanc’s top executives. To Alan, the most valuable learning from Vistage was introduction to the Adizes system. He believes that the Adizes Methodology was the ‘how to’ that he was looking for to solve business problems and propel systematic growth for his company. “I realised that Mediabanc was in a go-go stage but we had no system, no structure, no S.O.P. to grow,” he explains.

Alan says that the VCE-1 group members, Heah and the Adizes process guided growth – “It made it happen”. He elaborates that his team has been using the Potential Improvement Points (PIPs) cards under the Adizes Methodology to iron out problems and it has “worked wonders” for the company. The results could be seen. “We had less problems, happier employees and more business,” he discloses. So much so, the company was ready for an IPO to create more value. But the opportunity for a merger presented itself.

MediaBanc went into a merger with Media Monitors, an Australian company in the same business with main markets in Australia, New Zealand and Greater China. The merger commenced in November 2011 with Alan and partners selling their stakes. Both companies dropped the word “media” from their names and took a new identity called iSentia. The iSentia Group was listed on the Australian stock exchange in June 2014.

Alan explains that under the Adizes system, a company reaches “Prime” when there is maturity and systems, and the growth of the company is no longer dependent on its founder. He is therefore happy to let go and move on. He will be leaving iSentia at the end of September 2014. He is taking one year off, to spend more time with his family and ponder on what he wants to do next. It will not be total retirement. Alan says he will continue his membership in Vistage even after leaving iSentia and wants to do something where he can continue learning and ‘give back’ to society.