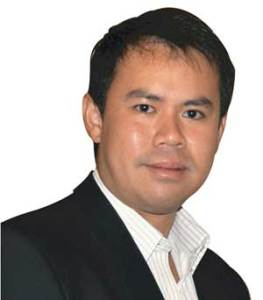 Taking over the reins of his family business at an early age, Leong Keng Mun is picking up the intricacies of running a business hands-on, as well as accelerating his learning from the Vistage process.

Keng Mun, 31, is a third generation business owner, having inherited Nam Lee Cheong Sdn Bhd, a company started by his grandfather in 1946 and passed to his father in 1970. Turnover stood at about RM32 million last year from the sale of a wide range of wine, spirits and liquor imported from Europe, Australia, US and other parts of the world. The spirits are distributed to hotels, restaurants, hypermarkets and other retail outlets all over Malaysia.

A Marketing and Information System graduate from Australia, Keng Mun reveals that he and his father had a lot of quality time together on many fishing trips when he was young. At age 12, he was already ‘familiar’ with his father’s office and colleagues, albeit playing and running along the shop aisle. It was straight into business when he finished his tertiary education.

Keng Mun says he did not feel the ‘generation gap’ as he was already comfortable with his father’s peers who were 20 years older than him. The challenge was instituting change. ‘The company was run the traditional way, based a lot on gut feel and experience,’ he explains. He saw the need to modernize and add structure to strengthen the business, but it was difficult to change set habits and traditions.

He is glad that he joined Vistage at age 23 as he had an avenue to bounce off ideas and ‘get things off my chest’. He would run his raw ideas during his issue presentations and get valuable feedback. ‘It is an enlightening process of ideas and your learning rate goes up exponentially,’ he declares. He is especially pleased that he can bring up private and confidential matters – ‘things you would not tell your friends over dinner’. By sharing his happy and unhappy moments, he adds that he has developed close friendship with some members in his Vistage Group.

Through the years, his major challenge was learning the ‘art of convincing’, that is, getting the buy-in to implement changes and remove resistance. ‘There are a lot of human factors, cultural differences, personalities and insights to deal with,’ he contends. It thus took some time to implement changes like computerization, accounting systems and inventory control. Manual record keeping, billings, collections and stocks are now automated, and Keng Mun can get all the figures, analyse them, plan for growth and measure performance.

On leadership, Keng Mun says he is still learning to be more objective and do more micro-planning before making a business decision. He is currently planning to take Nam Lee Cheong to the next level by entering into e-business and fine wine trading in Hong Kong.

We use cookies and other tracking technologies to assist with navigation of our websites, personalize content, analyze our traffic, analyze your use of our services, and assist with our promotional and marketing efforts. If you continue without changing your settings, we’ll assume that you are happy to receive all cookies on our websites. However, you can change your cookie preferences at any time.
Accept CookiesCookie Preferences Center >>
Privacy & Cookies Policy