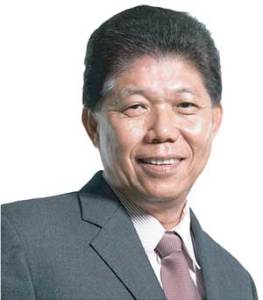 Successful Vistage CEO – Chan FooChan Foo has steered his company on a steady growth path by staying focus on his core business and also having the foresight to look for new opportunities.

Chan Foo, CEO of Centre West Resources, an industrial chemicals supplier, has steered the company for more than 30 years and seen the company grow by leaps and bounds. Through the ups and downs, he believes that Vistage has helped him to stay focused and also give him foresight to look ahead.

Chan Foo started as a sales manager in Centre West Industrial Supplies Sdn Bhd and later purchased company shares to become a major shareholder. With advice and guidance from Vistage members, he transformed the small trading company to a professionally run business. ‘I got a lot of feedback on what systems to implement and how a bigger business should be run,’ he notes.

Centre West supplies a wide range of chemicals sourced from countries worldwide. It has established a niche in the dry rubber industry, supplying local customers with chemicals such as accelerators, anti-oxidants, processing aids, and activators used in the processing of raw rubber into various intermediate and final products.

Over the years, Chan Foo says he was tempted to go into other businesses. ‘If a business can make money, why not go into it. If a product can sell, why not take up the agency?’ he used to ask himself. Thanks to Vistage, he is constantly reminded to be focused and not to dilute his resources, as working capital requirements and credit risks have to be carefully considered. From experience, he knows that specialization pays. ‘If you specialize in something, you can be really good at it and have the upper hand in terms of market information and how and when to take position.’ He acknowledges.

With focus in mind, Chan Foo spun off the chemicals department in Centre West Industrial Supplies into another company called Centre West Chemicals (CWC) Sdn Bhd in 1999. The objective was to clearly demarcate the marketing focus of the two companies as well as to reward long-serving staff. CWC holds the agency rights for many types of chemical used in the non-rubber industry. Most of the CW staff has been working with the company for more than 10 to 20 years, some capable and hardworking department heads were make shareholders and partners.

As competition is very intense in the chemical trading business, suppliers have to be on their toes and look out for new products. Chan Foo says the Vistage process has helped him to build self-confidence to seize opportunities ahead of time. This was especially so when he had the foresight about eight years ago to tap the China market for chemical sources. While others were worried about quality of supplies from China, Chan Foo decided to move forward. Today, he is happy that he made an early start, as it is no longer easy to get reliable principals. ‘If there are 100 suppliers, only 10 are reliable, you must be able to identify them,’ he explains.

Chan Foo reveals that the company remains focused in the rubber industry but will be expanding into the latex segment. This is to capitalize on the growing glove manufacturing sector since Malaysia is the world’s largest supplier of examination gloves. He foresees a breakthrough in this market segment and expects to double the company’s existing turnover of RM70m in the next two to three years.